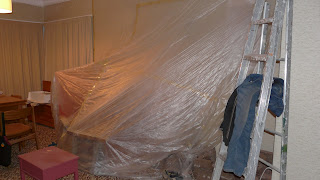 Another update on our dining room/ workroom. The last report was on the new macho hammerdrill, which worked a treat...
A "tent"to limit dust was built around the fireplace, and the brick facade was knocked down. 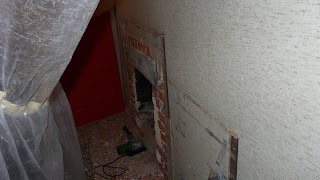 The front hearth stone came out fairly easily, and the terracotta bricks had to be hacked back to level them with the wall. 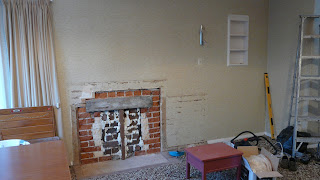 The opening was then filled up with insulation, the old bricks and foam. 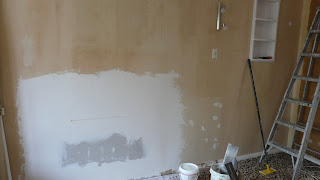 New board went over it and it was plastered over.
All gone! 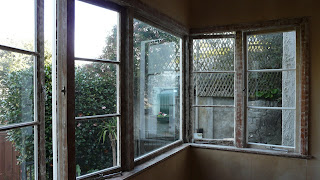 The window frames were sanded down to the timbre, and freshly re-painted. 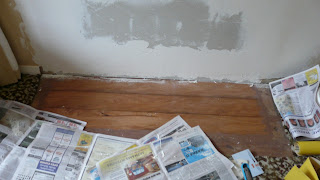 The hollow that the removed hearthstone left, was re-planked with salvaged matai planks. You can't really buy newly milled matai anymore as it is a protected tree species now, but half a century ago that's what people liked to use to build their houses with. The salvaged timbre from a demolition was quite expensive... 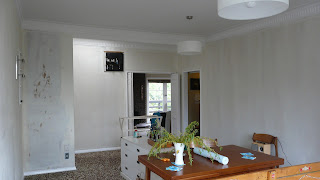 The wallpaper is now stripped off (goodbye to all that beige! ). The walls have been lightly sanded and have been sealed. 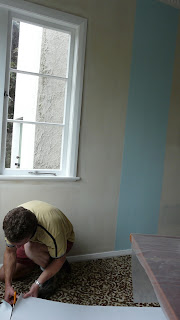 And now comes a really exciting bit; the new wallpaper goes up!!
His mum taught him well, and he really liked doing this part.
To Be Continued.......
Posted by Elmtree at Saturday, September 29, 2012