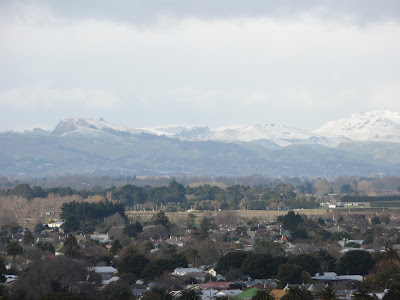 Well we are having a country wide winter storm passing over. Of course we are in Hawke's Bay and the weather never gets worse than a little frost and very rarely a sprinkling of snow on our local Te Mata Peak, but only for an hour on the very top.
Not this time.
My husband warned me this morning after he had left for work, so I took my camera to work at school.
This first picture was taken at the end of our street at about 8:20. Wow!!!!
Te Mata Peak is the left high area you can see. It is 399 meters above sea level.
It used to be a giant warrior... 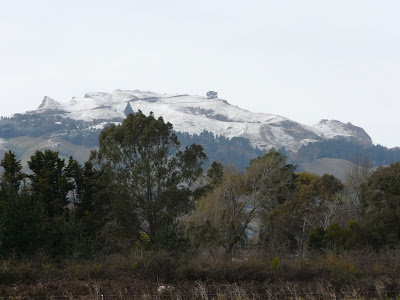 This picture was taken from school. Everyone was SO Excited about the amount of snow so close to home! This aount of snow around Hastings and Havelock North hasn't been seen since 1976 ( or so we heard).
Can you see the giant? He is lying down on his back, his head is on the right. His feet are out of the picture , but he's definitely a he... He was tricked to fall in love with a maiden from a warring tribe, and made to perform impossible tasks, such as eating a forest and eating the hills. Unfortunately the maiden fell in love with him too. Then when he choked on a rock and died , she threw herself off his height to die . He formed our Peak and she formed the steep depth on the other side.
A sad story of un-requited love. 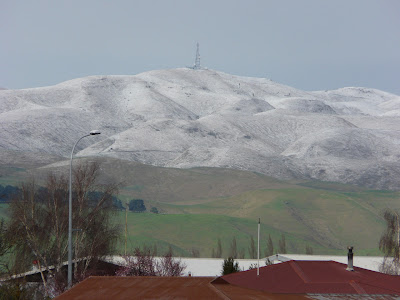 This is mount Erin a bit further south of Havelock North.
Oh I love my little zoom-lens .
Although the wind was bitterly cold, there was quite a bit of sun, and by 11:30 all the snow was gone again. But this cold weather should last a couple more days, so we shall see what tomorrow will bring. 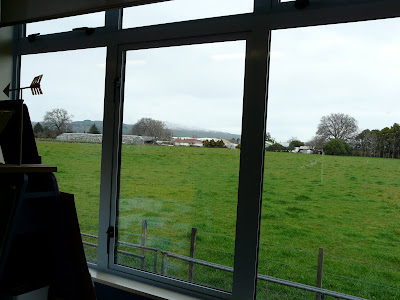 This is the view from one of the classrooms in which I work. A herd of calves gets fattened up in the field each year, we can see the swallows and the sky-larks, silly pukekos pass by and falcons/harriers look for mice and rabbits.
It's nice to be able to point out an animal to one of the children, quite often they don't know the name of the creature, or thought to look for nature right outside the window.
I am very lucky and pleased that I am allowed to have a permanent nature table in 1 of the classrooms. I try to put things on it in relation to the season. And the kids can bring their own things, although it had to be explained to them that a toy truck or a lego creation wasn't what we wanted on that table.
Live bugs are fine, for a day, and then we put them in the field. However I draw the line at cockroaches and dismantled rodents the cat brought home.....
Posted by Elmtree at Monday, August 15, 2011