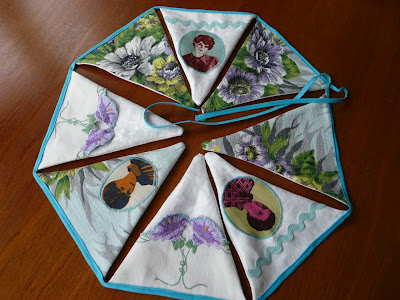 So these are my new kitchen curtains (or bunting) that I made in the school holidays. 4 of these flags have 1960's bark cloth with florals on a light -blue background , the other 4 have been made with white damask serviettes, light blue ric-rac and purple embroidered morning-glories from a vintage doilie. And I used some of the 60's style faces from my Fabric-a-brac buy. I appliqued them on with blue thread.
All of them are backed by pieces out of an old white tea-towel. Woven into that tea-towel were the words ; New Zealand Steam Ship Company Ltd. I'd say it's quite old.
We haven't had steam ships for a while now.... 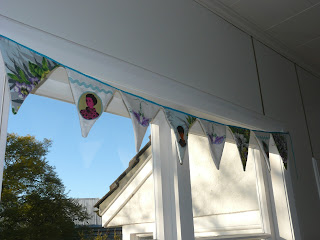 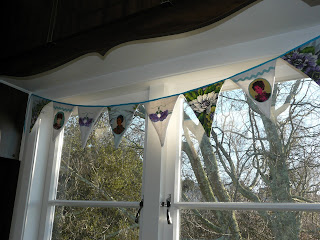 Well, it sure beats those nylon fluffies that were hanging here. These add a festive atmosphere to my dark 1970's kitchen decor. Yet a touch of vintage at the same time.
I had to hunt through my box of bias binding to find the right blue. All bought secondhand, some quite old.
There are a few still wrapped in their old labels, look how pretty!
A bird of paradise on the pale pink bias binding  from Scotland.
Paramount Art Deco buildings on the black gingham bias binding from England. 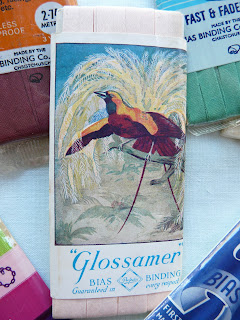 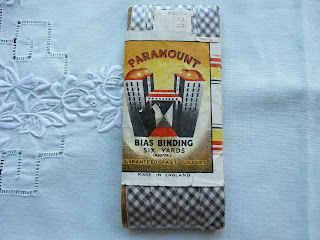 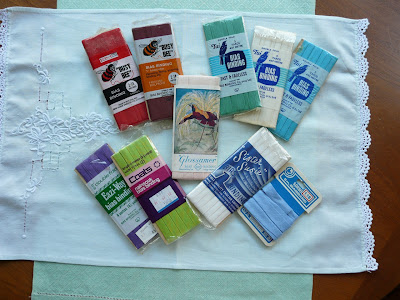 Tuis and Buzzy-bees on the bias binding from New Zealand, and who was Sister Susie from England? Looking at the style of the graphics I'd guess it's from around the 40's or 50's, although it does have a cellophane wrapper. 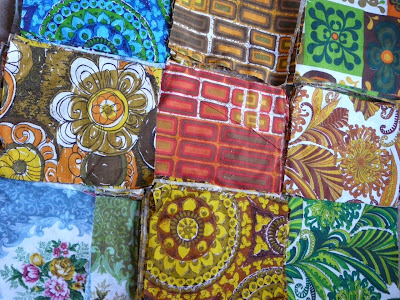 Speaking of Fabric-a-brac , I will be having a table at the next "meeting"in Palmerston-North on the 20th of August. And I have been going through my stash  finding fabrics I have decided must go.
(Still not finished with that..)
Above are some patches I scored years ago, all the same size , cut from unused 1970's curtains.
Very bright and beautifully ugly. All up for sale; cheap cheap!!  Genuine retro!! Get it here!!
Posted by Elmtree at Friday, August 12, 2011