Boxing day was the anniversary of Ma's passing away. But it actually started quite early for me; with earthquakes. Not everyone in the house felt them then already, but I felt the one at 2:o7 (4.2Magnitude), closely followed by a faint tremble at 2:08am(3.8M.) The creak of the house, as if a windgust hit the walls, is what woke me, and a very distinct rumble. Like a truck was driving down the street.
I had just dropped off to sleep again, when a 4.3M. shook at 2:38am.
It sure gets your heart going in the middle of the night.
The next one was at 3 minutes past 8(3.8M.) Everyone felt that one. We checked the Christchurch earthquake map to see how big they were. You can do that too if you click on the link and go to 26-12-2010. You will see that there were 33 that day. Some so small that you don't feel them. 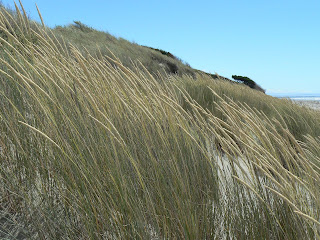 Some beautiful dunes at the Christchurch beach. I love the way the wind is moving the grasses.
We all felt the next one though at 10:30(4.9M.) This one caused more damage in town and parts of the shopping areas (all ready for the big Boxing day sales) had to be closed off.
Where was I?
All soaped up in the shower, with my eyes closed... Rumble, rumble!
I squealed, held on to the wall, saw that the walls were moving in opposite ways to each other, realized the wall I was holding was a glass one (not good!) . Took a breath, realized the power was still on, and the water was still going, and just waited.
It stopped.
I rinsed.
Husband came running, "Yup, I'm o.k. That was interesting!.."
I don't usually feel like having a stiff drink that time of the morning, but I did that day.
I think we felt 2 more during the day. I have never experienced more than 1 in a day, and I felt very on edge; I think I can understand how frazzled the people of Christchurch must feel.
And they are all deemed aftershocks from the big one in September. 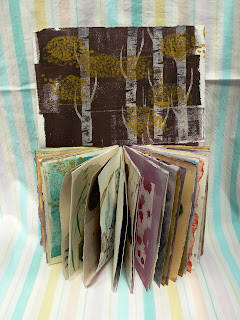 The 6th, 7th and 8th of January saw me doing a printing course at my bookarts club. We tried our hands at lots of different methods of mark making, with printing ink on lovely thick paper. 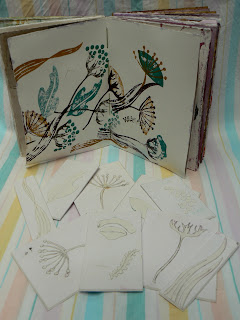 I really liked this method of creating my own plates with sealed cardboard cut-outs. I tried to make it look like late 50's early 60's botanicals. The teal and mustard colours helped .
The composition is terrible, but I know what I meant...
Wouldn't it be cool if I could have my own yardage of fabric with these, just like tiny happy has done? 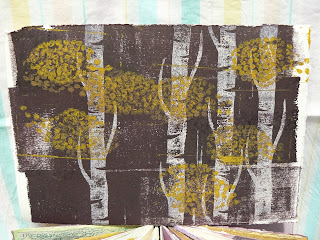 And this is the best, I want to frame it. I used the same method.
Love the birches! 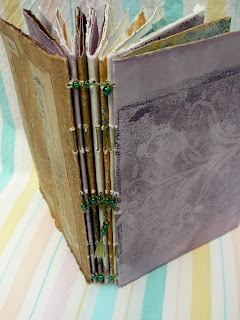 We took all the pages and bound them into a book. I used some nice green linen thread from Ma-L. and green glass beads.
This way I have a neat record of different techniques all tidily put together for later reference.
Treasure Hunt Show Case. 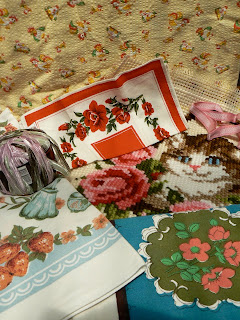 These haven't even been washed yet. I was so pleased to be able to go op-shopping again, since most of them close for 3 weeks around Christmas.
Yellow seer-sucker with little chickens destined for kids' clothes, several floral tablecloths for bunting or such like, quite a few stains I'm afraid. But they are soaking in the nappisan as we speak, so they might turn out o.k.
A red rosed serviette for zipbags, and a very sweet pussy-cat tapestry. Would look good for a bag I think. 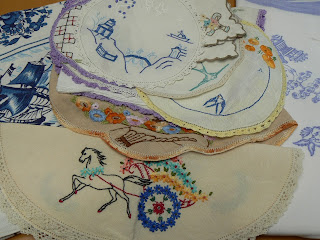 I got a treasure of vintage doilies in December. I get picky , I only buy the ones with the finest stitches. One has the willow-pattern on it, just like the tablecloth on the right.
And a nice dutch souvenir tablecloth as well, good for the dutch bunting I make. 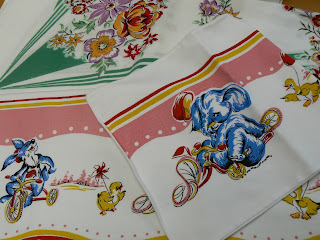 A child's sheet and pillowslip set from the 50's or early 60's; to be used for a little dress or a pinafore.
And another tablecloth in very good condition.
Weird Impulse Buy. 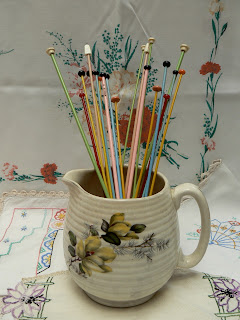 Knitting needles.
I don't actually like knitting very much. But these oldies have such pretty lollie colours, I think they look as good as a bunch of flowers!
Posted by Elmtree at Friday, January 14, 2011

Exciting stuff! Nothing like a good shakeup to blow out the cobwebs, eh?


Hey, also, remind me to give you some Japanese prints I've got for you, on handmade paper. I keep forgetting, or else I keep not meeting up with you, or whatever.

Thank you Jack, that sounds lovely. I'll e-mail you! sis.