The end of a school- and craft-year. 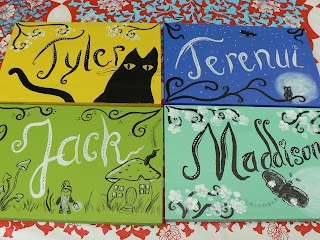 A Happy 2011 to you all!
Aren't they cute... The teachers of year 3 at the primary school where I work decided to give each child a little blackboard with the child's name on the back. The kids had to paint on the layers of blackboard paint and chose the colour for the back.
They then asked their enthusiastic teacher-aide (yes that's me!) and an arty student teacher to put the child's name on the back with some nice twirly letters. Well, we started to outdo each other, and it got out of hand, didn't it...
I spent about 3 schooldays painting with the kids hanging over my shoulder. Boards for about 85 kids, of which I did over 60. No matter, since the last 2 weeks of school were very irregular, full of singing practices and finishing off art projects.
I painted moths in the moonlight, bats and cats, snails, hedgehogs, owls, crickets and bugs and spiderwebs, blossomtrees, rain on ponds with dragonflies, 2 gnomes and 1 fairy. Each board different. And oodles of spirals, because that's my thing.
They loved it, and the parents were suitably impressed! I got lots of hugs from the kids and many thanks. It was great fun!! 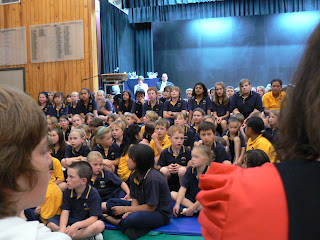 I'll show you some photos from my working/school life about the End of Year Assembly or Prizegiving for our school.
Since there was no way all the kids (over 400) and their parents could have fitted in our small school hall, we had it at the nearest highschool, the one our youngest daughter has just said goodbye to.
All the children had been practicing their repertoire of songs for this evening. You can see their school uniforms and the principal and deputy sitting on the stage with all the silver cups and certificates .
I am not personally in favour of children wearing uniforms; I can see the advantage of keeping teenagers in line with behaviour and fashion competition by wearing uniform, but I feel children should be able to dress in all the colours of the rainbow or come dressed as spiderman or a fairy for the day.
It's all very British from a long time ago..... 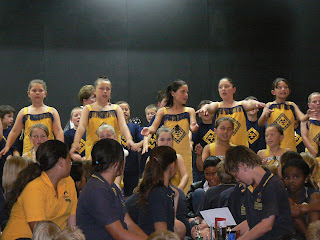 The evening starts with a welcome song, followed by the national anthem in English and Maori.
So the boy in the foreground obviously scored big time in the cup department, but luckily they also give out certificates now and during the year for being the one with the most cheerful or helpful manners, or the most improved in work, not necessarily the best at a particular subject.
It's time for the Kapa Haka group (Maori song and dance) to show their stuff. Accompanied by guitar and singing, the girls show welcoming hand movements, the boys singing behind them. 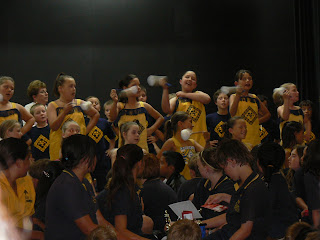 Now a song complicated by rhytmic waving and slapping of the poi (soft white balls on a string). It looks spectacular. The girls look most confident in front of hundreds of parents. 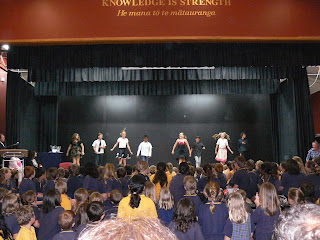 Some speeches are made about the seniors leaving, people that have helped the school during the year, some teachers leaving or getting married. Our senior pupils get a weekly rock'n roll lesson , our principal is a big fan. So the best dancers get to show off their steps, it's great for confidence and boys and girls having to interact. The other kids think it is so grown-up! 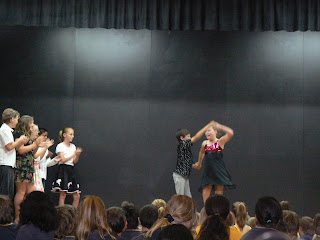 Everyone cheers and claps along!! 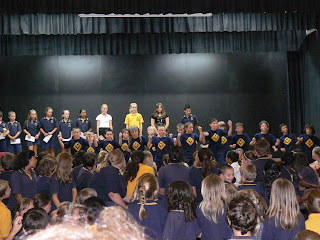 Apart from all the holiday songs sang by all the children, the kapa haka group has another go, this time it is the boys turn, with a spirited haka(challenge), with much footstamping, shouting and chest slapping. The leader memorized a long haka in Maori, all about making the right choices and finding your mana (self -worth and respect). The 4 new Young Leaders for 2011 are standing behind them on stage, all the kids can go to them with a problem, or they have to represent the school at events.
And that was the end of the evening, all the parents find their kids and it's a madhouse for 10 minutes! See you all in 6 weeks!
I hope you found this interesting, especially if you are not from New Zealand! Here is a link to a haka done by another local school, it looks like they had many of the same movements.
The boys love doing it, and it boosts their confidence.
Originally a haka was used to call up the influence of one's ancestors to gather strength before going into battle. But anything can be a challenge; doing the right thing, starting something new, giving up a bad habit, and sometimes to gather strength after a sad time. Hakas are sometimes performed at the end of a funeral, at which time they feel very raw and overwhelming. It is also a controlled way of letting anger out. 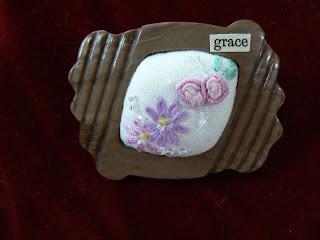 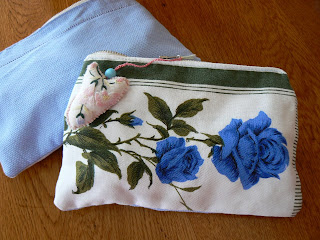 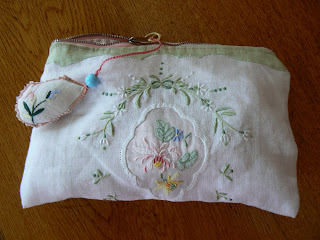 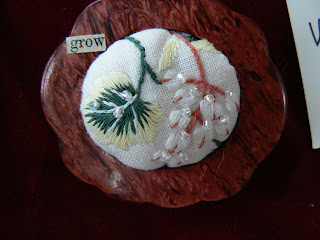 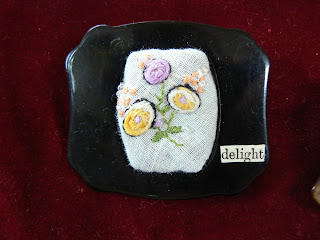 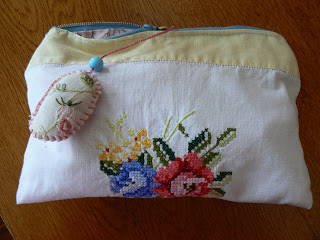 Here some more of the gorgeous things I made for the Christmas Fairs I had a stall at, some sold, some will sell later. (think Positive). A few of the brooches I made using beltbuckles dating from the 1930's to 50's, embroideries of the same date and words cut from an ancient book.
Also some little zippered pouches made from vintage embroideries and serviettes, even the zips and lining are recycled. They are fun to make and can be used for anything.
This was a big post, but I'm on holiday and have lots of time!
Posted by Elmtree at Thursday, January 13, 2011

Thanks! Although that sounds right, it actually came from Samoan. Same word and meaning though. Introduced to English language by James Cook.
Same as the word tattoo.
Language is always changing, it's great.