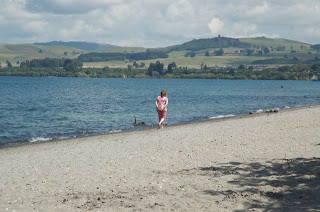 For my birthday in the beginning of February ( yes, I am one of those chaotic aquarians , which is why I am only just now writing about it) I was taken to Taupo for a weekend by my lovely man. He borrowed a racy little car from my brother, and took me to a lovely bed and breakfast up in the hills. It was utter peace and quiet with a gorgeous view, and luxurious surroundings. We ate nice meals in cafe's and drank strong coffees on a terrace. We enjoyed the lake's beach and swam in the cool water. And of course we took a sleep-inducing dip in the local A.C.Baths which has 30'C + water , heated geothermally by the earth.
Here I am going for a stroll accompanied by a black swan. Keeping a look out for "sea"-glass. 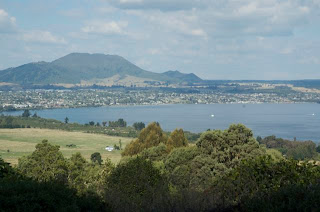 Our privileged view of Lake Taupo and surroundings. 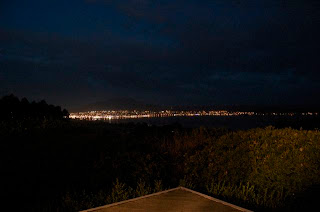 And just as pretty at night. Especially with a wee drop of homemade whiskey. 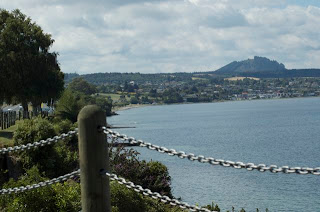 At this spot there is a new large wooden bench , where I plonked myself down the next morning with a book. We had just finished our morning coffee across the road in a cafe , and my bloke wanted to check something out in town. So I installed myself here. After a while I looked up from my book to find 3 people standing close by with cameras and looking at the seat. Their accents were a heavy Scottish and it suddenly dawned on me, that they were there to pay their respects at this wooden bench , which had been placed there to commemorate the tragic and violent death of a young scottish tourist in Taupo in 2008. Karen Aim had been killed by a teenager who was trying to become a gang member.
So I stood up and offered them the bench to photograph and reflect upon. The middle-aged lady spoke to me and I understood (very heavy Scottish accent)they were friends of her parents, having come to see what it looked like and to lay some flowers . I told her that I wasn't from Taupo, but that I nevertheless was aware of what had happened , and how shocked people had been about the senseless-ness of it. She told me that Karen had always been a loving young woman who loved giving hugs, and that it was so tragic to think that the young man who killed her, would have been so much better off, if he had had hugs like that in his life too.
I thought that her pity for the killer was an amazing way to deal with this awful thing, instead of anger and revenge, although she said they were pleased that it had all been dealt with properly by the courts. Mainly because there was a kind of closure for the family...
I couldn't begin to imagine what it might feel like to lose a family member due to violence.
How fortunate we are, really. And how fortunate Karen's parents are to have such good friends, who travelled across the other side of the planet, to make a photo of a wooden bench, just to be able to say; yes it looks good , it's allright.
I did read some more of my book there, later. But it felt very different, sitting there.
Posted by Elmtree at Sunday, April 04, 2010