It really is summer here. Even though we have had plenty of rain this time, we have also had some gorgeous days. This is one of those , we went to my favourite beach; Ocean Beach. No doubt there are many beaches in the world called Ocean Beach , but I think this one is the prettiest.
It is only a 20 minute drive through the hills to get there.
And in case you are wondering about the blue sky; that's real, I did not tweak these photos at all. Unfortunately we are quite close to the ozone hole here in NZ, and you'd better protect yourself against the sun, because you will burn within 15 minutes. We don't really go brown as I did when I was a child in Europe. You just go red. Ouch. 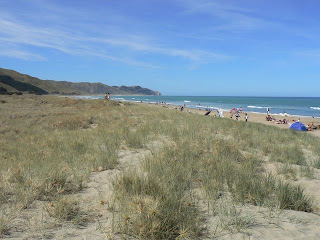 Walking through the dunes and looking to my left, I can see the other side of Cape Kidnappers. This is where, in 1769, James Cook approached the coast and asked an tahitian passenger to translate what the Maoris in their canoes were saying, their respective languages being similar. During the transactions the Maoris pulled the Tahitian into their canoe and took off with him. Shots were fired from the "Endeavour", a Maori perished, and the Tahitian got back on board. The name Cape Kidnappers has stuck , but the Maori name is Matau o Maui, or Maui's Hook. Maui is a mythical hero, and he fished up the North Island like a big fish with this hook.
I love this story , and I already knew this story before I even migrated to New Zealand. 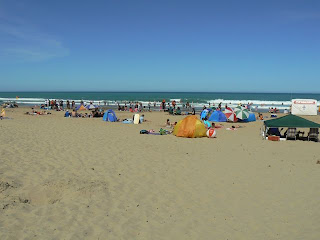 So this is how busy it is on this day. Probably 400 people, that's busy for here. Hopefully everyone in Europe is now insanely jealous....
People are swimming between the flags , because we get rips, where you get pulled further out to sea. 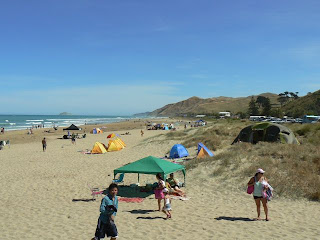 Looking to my right, there is a tiny community of mostly holiday houses. I'd like to do that one day; rent a little bach for a week. A swim and a walk every morning. Read lots of books, easy meals, comfy chair, take my sketchbook and pastels......aaahh....... 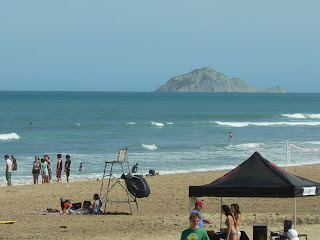 That is Bare Island. I think it has bushes growing on the other side, but on this side it is bare.
Sorry, that is the only story I know about it. A bit sparse... 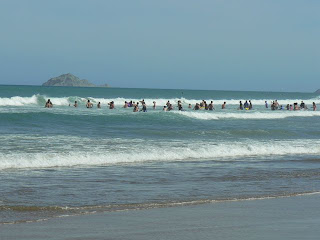 And the surf was just right on this day! Great for body surfing or with one of those little boogie-boards. Exhilarating to feel the waves crash against you and to zoom in front of them.
I must admit I do squeal if a particularly big wave hits. I may be 43, but in the surf I feel like I am 11 again. Good fun.
You should never lose that child-like feeling, otherwise I reckon you become a sour-puss and a fuddy-duddy!! And later, a bitter old lady.... 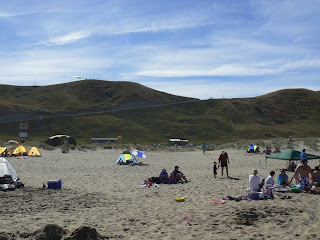 This is behind me, the road back up into the hills. They have widened it; you don't have that horrible quick stop and then having to maneuver around oncoming traffic. And the whole road has now been tar-sealed. No more gravel and dust. On the way home there were 7 cars in front of us. Quite a traffic jam....hehehe. 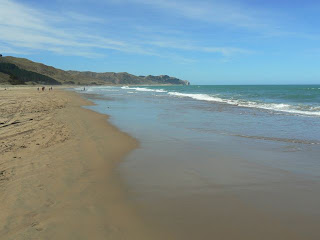 Time for a beach walk. A nice breeze , sound of seagulls and skylarks, waves rolling and salt on your lips. 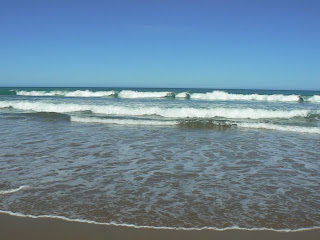 If you click on the picture, you will see how clear the water is.
Don't you just want to run in.......woohoo!!!
Still snowing is it in Europe? Or has the thaw set in , with all that brown sludge.....
Posted by Elmtree at Wednesday, January 20, 2010

- Your much younger brother Jack :)