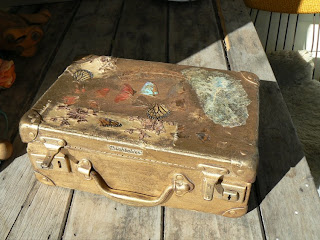 I found a little gold suitcase a few years ago. My youngest immediately possessed it for her best treasures. She has now outgrown it and I have reclaimed it.  Some one had already glued some butterfly wings on it , even  exotic luminescent blue wings. I added some more that I found in the autumn. and other bits for an interesting look. I added a  fairy picture  my youngest feels to old for . My Mum gave that to her a long time ago. I'll use it... 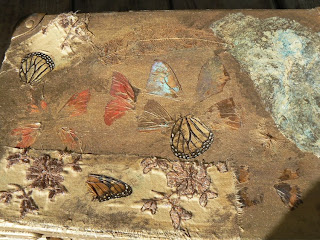 It is not my best artwork but it just looks like an ancient remnant of something opulent dug up. 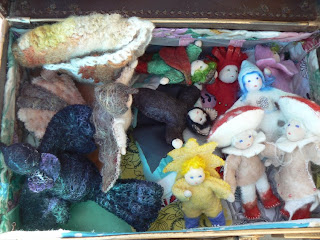 And look ; my Bushbabies can sleep in here , and have midnight parties! 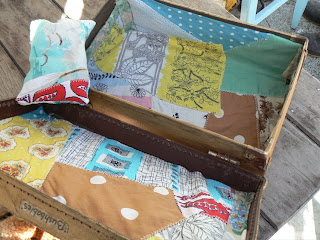 I lined the little suitcase with an old ovencloth from the fifties , all crazy patchworked with scraps on a sturdy backing of brown jute cloth. The edges were bound with a strip of  vintage Sanderson material.  I did it pretty roughly , but it was fun.  With a left over piece I made a little lavender bag so that my suitcase and my Bushbabies will smell fresh.
I harvest the lavender from our own garden in the autumn , and mix it with some orris root to fix the scent.
I think I like the red fabric with the little red seedpods the best. 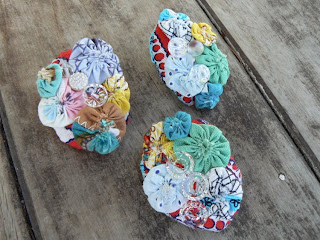 There were still some small scraps left over.  I cut them into little circles and made "yoyo's" out of them . I covered a piece of thick felt with some of the 50's scraps and stitched 5 yoyo's onto each. Three small glass buttons each , then a pin on the back. And 3 little encrusted brooches were created , from the scraps of an old ovencloth!   I have worn one to school this week and already had some positive comments .
This is pushing thriftiness to the max ; the scraps were already reused as kitchen cloth , and now as jewellery!    Exactly as I like it....
Posted by Elmtree at Tuesday, July 28, 2009

Labels: made by Elmtree, vintage fabrics

great gold suitcase, and dolls. love your house book. wonderful ephemera. and i ABSOLUTELY LOVE your header. what wonderful COLORS!!! and looks so soft. i just stumbled on your blog tonight while blog surfing.

please consider donating a piece of your artwork to an online auction benefiting Autism via Art Now For Autism, there are details at my blog and i'm doing a giveaway to raise awareness for the auction. thanks-