Anzac Day Battles and a Fighter of a Different Kind. 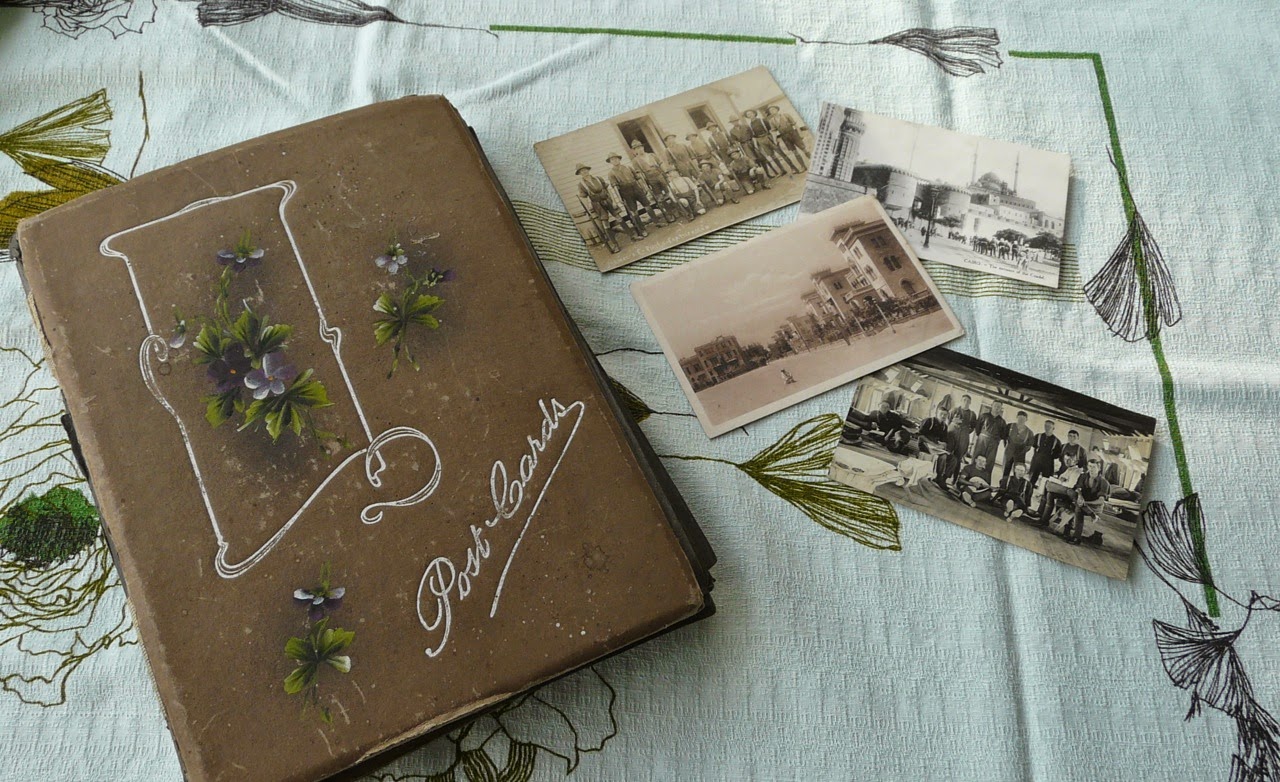 Today is Anzac Day. A national day off work, and our national day of remembering those that have fought or were affected in wars past and present. Starting with The Great War (that would end all wars...) 1914-1917.
This morning my man and I attended our first Dawn Service at the Cenotaph, walking down the hill before the birds woke, to join a large crowd of at least two thousand people, in silence. Watching our young soldiers marching with the old veterans with their medals glinting in the street lamps. Followed by a group of relatives, including young children, wearing their inherited medals from their fathers, grandfathers or uncles that served long ago, and some not so long ago. We listened to the prayers, national anthems (Australia as well) and speeches delivered by respected people of our community, including a girl and a boy from the local highschools. A triple gun salute, a bugle played the last salute, and a bagpipe a lament.
Then the 99th Dawn Parade dissolved, people laid flowers at the monument, and talked to each other. The sun was up above the sea. It was time to climb back up our hill, with the singing birds and have breakfast.

A friend of ours gave us a box of books from his mother whom passed away recently, knowing I like old books, to use in artwork or just for looking at. Amongst the books was an old postcard album, chock-full of mainly scenic cards from around the world, but the best thing for me were the messages on the back, and the old script in curly inked or pencilled letters. 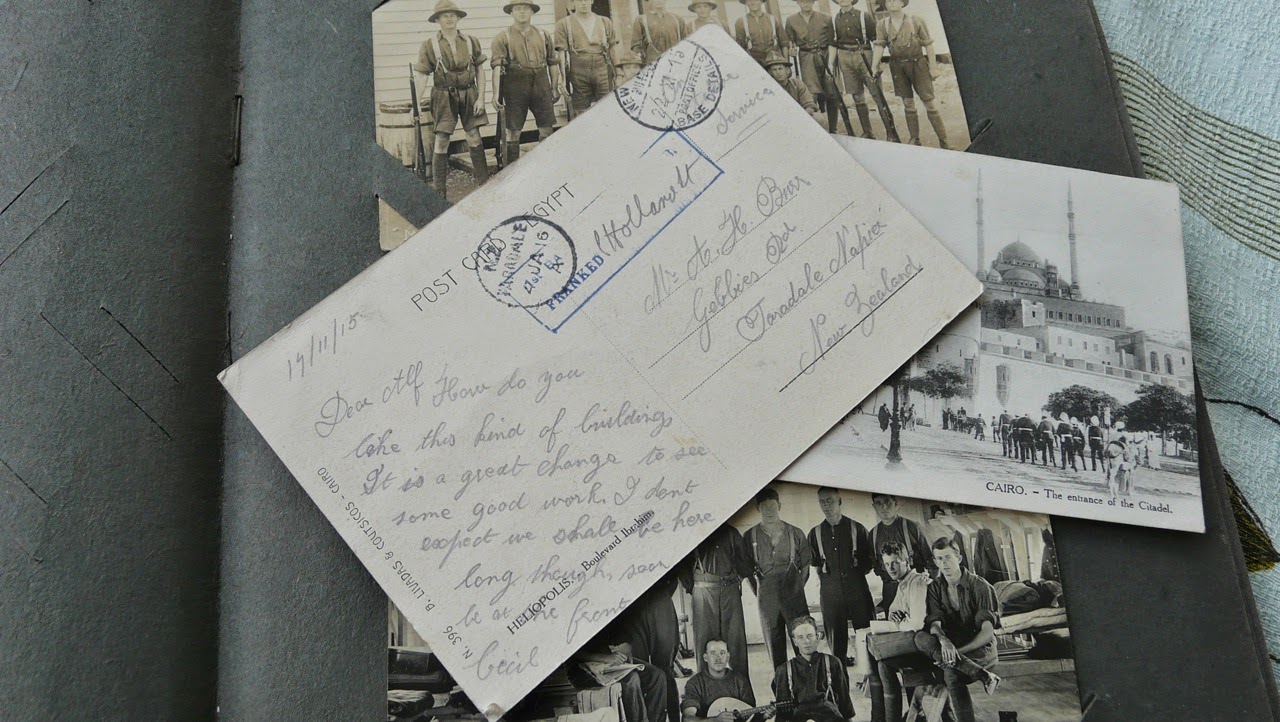 Most were dated between 1906-1918. Including some cards sent from Egypt written by soldier Cecil, to Alf in New Zealand.
- "17/11/1915, on active service,  Dear Alf,How do you like this kind of building. It is a great change to see some good work. I don't expect we shall be here long though, soon be at the front. Cecil." 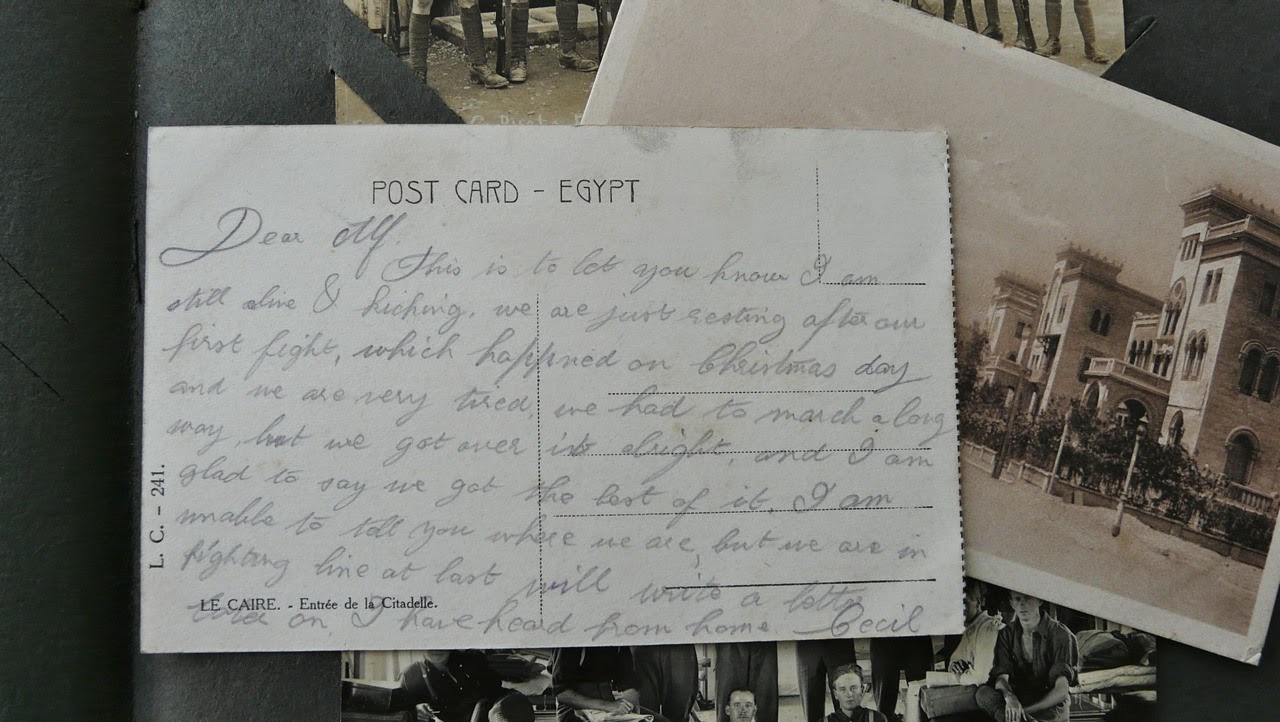 The other postcard from Egypt doesn't have postmarks or address, so it would have been included within a letter.

- "Dear Alf. This is to let you know I am still alive & kicking, we are just resting after our first fight, which happened on Christmas day and we are very tired, we had to march a long way, but we got over it alright, and I am glad to say we got the best of it. I am unable to tell you where we are, but we are in fighting line at last. Will write a letter later on. I have heard from home. Cecil."


Did Cecil make it back home in one piece?

Our friend doesn't know who either fellow was. Just one of the 20% of new Zealand men that left New Zealand at that time, that made the months-long journey by ship to the other side to help Mother England. 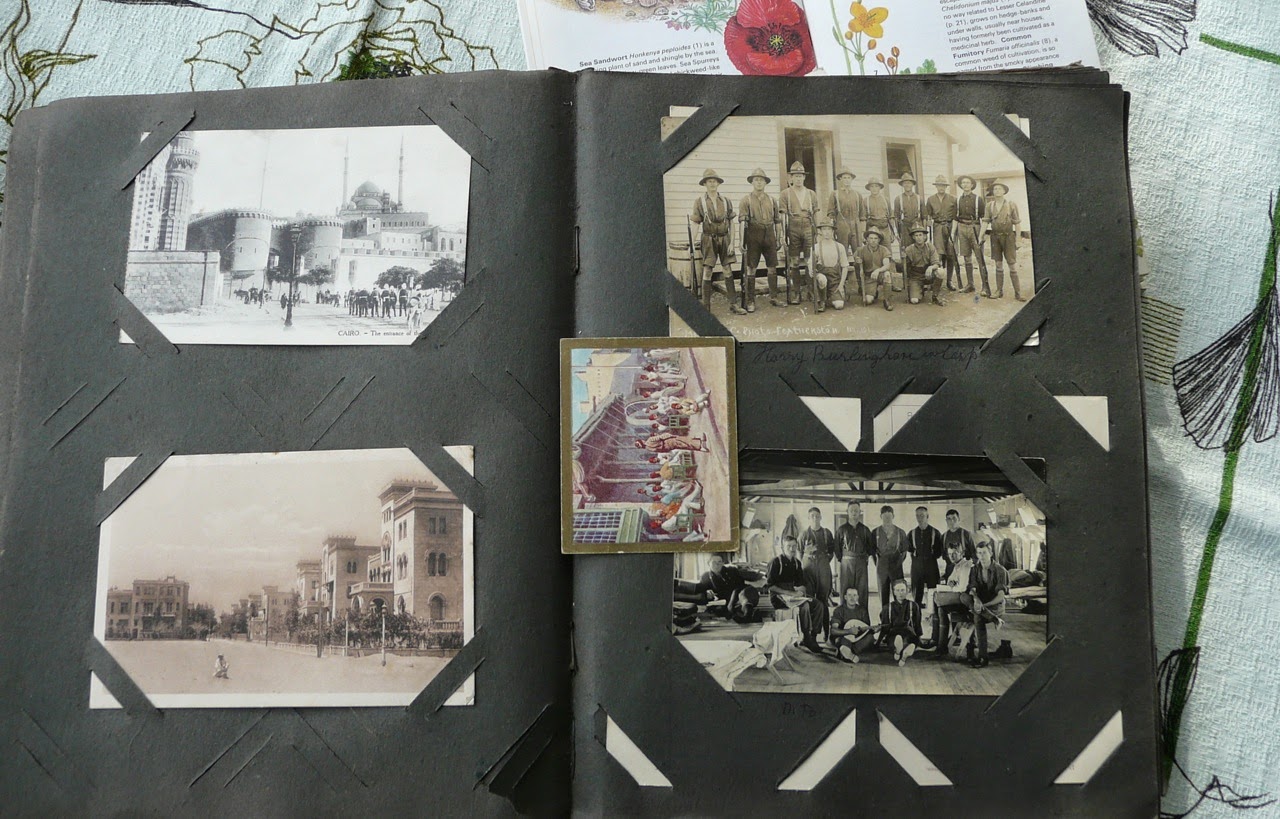 
My lovely friend N. is recovering from her first round of chemotherapy. And her hair is starting to fall out, everywhere. She asked us to do her a service; a number 4 haircut please.  We obliged, and much laughter accompanied this task. I had already spend the afternoon with her buying hats and oodles of scarves, and drinking coffee at the beach front.
We googled how to tie them attractively and above all feminine-like, not tied as if you were going to spring clean the house.
One should always retain one's decorum...
She looked just fine after the buzzcut. The same N. just shorter hair. As a matter of fact it also took some years off!
Nice bonus. 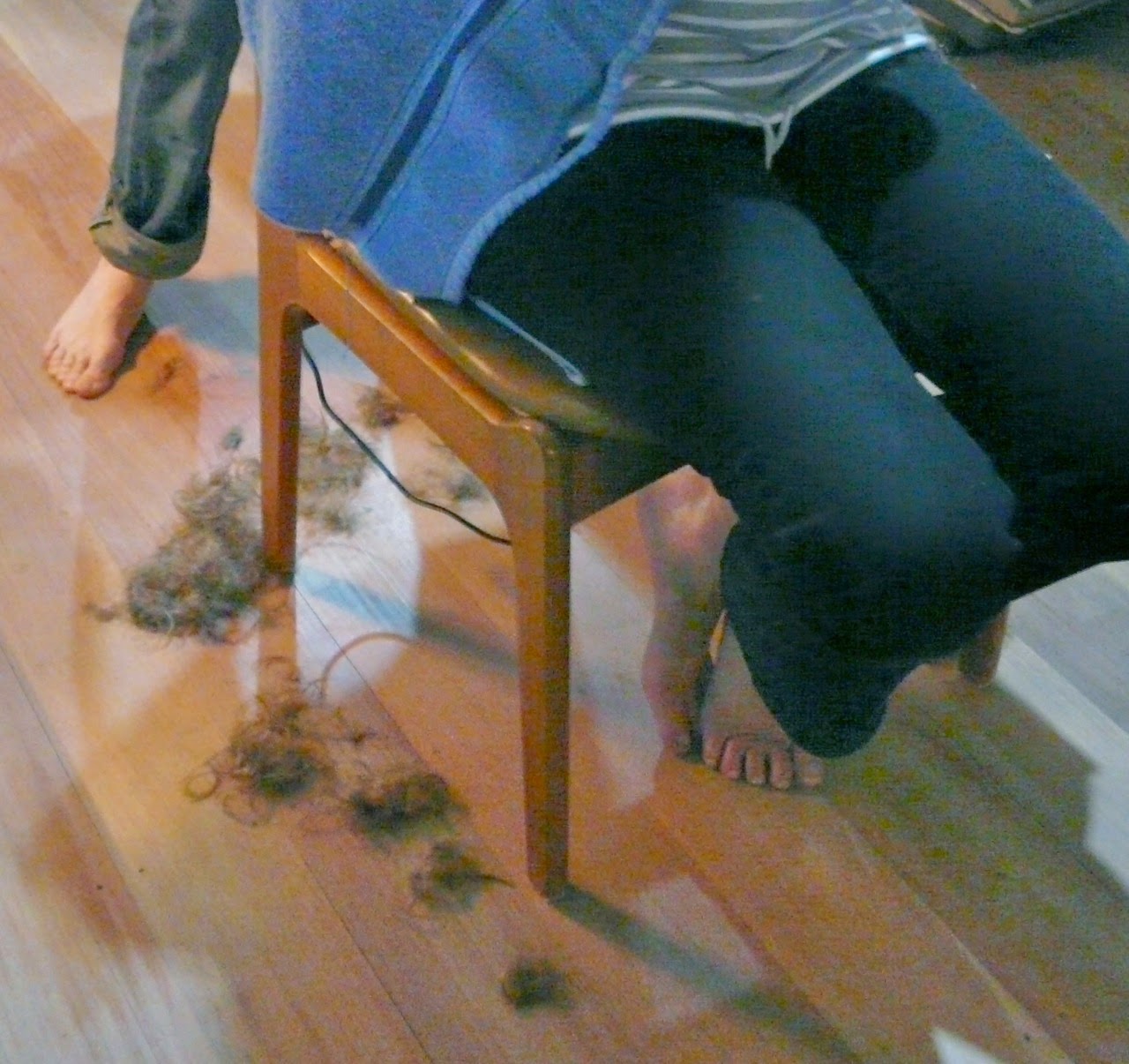 Memories are treasures to hold on to , the past is often revisited on Anzac day. cheers Marie

Hi there. That post card album is wonderful. It would be a great project to scan or photograph some of the postcards and create the postcard book in miniature. I hope your friend enjoys her new look with her hats and scarves and feels good about herself. She is lucky to have a good friend (and hairdresser) to support her and laugh with her through a rough time.

An important day, I have no WW1 history in my family, as The netherlands remained neutral, and that remained respected, although there is a picture of my grandpa in uniform at mobilisation time, but that's as far as it went. Of course we do have lots of family to think of from the WW2, as The Netherlands were occupied for 5 years. Some experienced harrowing times in P.o.W. camps in Tschecoslovakia, and work camps in Dresden, not to mention the day to day stresses of the time, keeping families safe and fed.

Hi 12create , I have been looking at your work in miniature and it is marvelous. As a matter of fact I've seen your big project for your sister and it is mind-boggling.
Our friend still has months to go, but we need to keep laughing, eh!

Thank you. Likewise I have loved flicking through your blog. Hopefully we can catch up if I head up that way. I would love to experiment some more with felt work and other textile crafts. I have made some felt a long time ago and have made a felt purse shaped around a rock which was fun. At the moment I am interested in some of the vintage embroidery and felt crafts. I am going to have a go at making some miniature felt bags based on patterns from the 1940s/50s era. We will have to see how that goes.

I assume felt bags like the ones published in Rosemary Mcleods' book? Those are awesome, and all the gorgeous flower embroidery!