Clouds in our Skies.

So last Monday 6th august,11:30ish at night, Tongariro, one of our volcanoes in the central North-Island plateau, erupted. It had been asleep since 1897. It burped out a bunch of rocks, a few explosions, much steam and ash, accompanied by small tremors and lightning.
None of which we heard or felt in Napier.
But it did smell funny in the morning on Tuesday; a faint smell of sulphur.
I then heard it on the radio news, and went outside, where I could see small flecks of white-grey ash lying on the ballustrade of our deck.
And once I got to school for work, this (above) is what my car looked like.

I had taken my camera along, and after work in the early afternoon I drove up Te Mata Peak look-out point.
On a clear day you can see Mt.Ruapehu from here, the sister volcano of the 3 grouped together there. But you can see from my photo, that it was cloudy and hazy.
This is a Nasa photo, much clearer, even though at night.
The distance between Napier and the volcanic plateau is about 110 km as the crow flies.
Or in this case; as the ash drifts.

We live on that large hill outcrop at the sea side. On the left is Havelock North and the outskirts of Hastings. Hazy everywhere.

You can really see the ash filled air between the ranges in the distance and the green hills in the foreground. By this time of the day it was slowly moving south .
I then turned around to the east and looked down into one of my favourite scenery, the Tuki-tuki river valley. Across the river is a glade of pine trees, which was softly smoking it seemed.
No, not more ash, but soft green-yellow billows of pine pollen.
Can you feel a sneeze coming on? 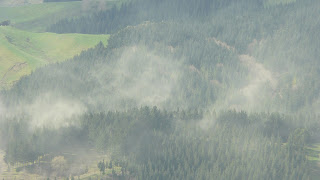 Aaah-chooo...
I did have some teary eyes that day and the next, but I usually have a more severe response to other pollen allergy, so I think I was reacting to the ash.

The volcanologists are saying that there are 3 scenarios: *1 Tongariro will simply go back to sleep, and it was just farting in bed, *2 it will keep going quietly for a while, with gentle steaming and ash throwing *3 it might be gearing up for more activity.
The ash etcetera was coming out of 3 new vents apparantly. Also the magma is bubbling up higher than usual, measured by certain gases in the steam. But that is all they can tell us.
-However, White Island off the coast of Bay of Plenty has also erupted, either on Tuesday or Wednesday. It hasn't done that for 12 years, although there is always some bubbling going on there. White island is a volcano, of which only a quarter of its full size is sticking up out of the sea.
- And if that isn't enough to make you wonder if they are connected, so has another underwater volcano North of New Zealand, called Mount Monowai.
A navy ship found 25 000 square km worth of floating pumice on the surface of the ocean.
All these volcanoes are of course on the fault line of the tectonic plates on which we balance here in little old New Zealand...
Interesting stuff! We'll just keep watching this space...