On our outside deck or veranda the former owner has attached this home-made contraption ; a bird feeder made from plumbers pvc piping that swivels out, with a removable bowl. In it we were advised to put sugar water for the tuis that frequent our woody gully.
I love our native tui bird and its fantastic song. (pronounce tui as 'to-ee')
The old colonials gave them the name 'parson-bird' because the curly white throat feathers looked like the white dog-collar a parson or clergy-man wears.  The name never stuck. The Maori name of tui did.
Here are some pictures I made from the living room and from the deck.
I am feeling very David Attenborough.. 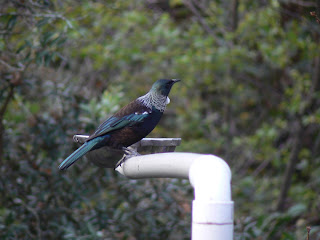 Well , I think they like my mixture, because I often have to top it up twice a day! I make the sugarwater by dissolving 1 cup of sugar(250ml) into 1 liter of hot water, I make enough to fill a 2.5 liter bottle, and I add a generous spoon of honey as well. I thought I'd put in a few nutrients at least.
They go through that in 1 week! 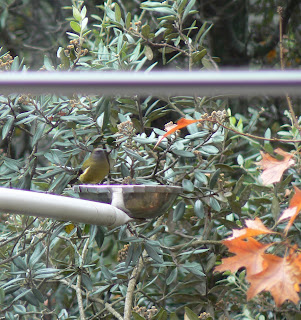 But it isn't just the tuis, the shy bellbird comes too! And his song is even more beautiful, not as many scratchy notes as the tui, more fluid like a glockenspiel. Such big sounds from a tiny bird. And quite pretty really, with that soft yellow-green and velvety grey head. 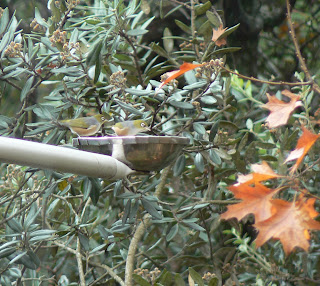 And surprise, the wax-eyes ( or silver-eyes) are nectar feeders too. Something I didn't know. I thought they went for insects and berries only. This is a great picture of them because they are always moving about. 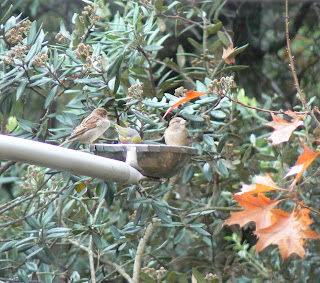 Well, I should have known... Sparrows are just opportunists. They'll eat anything. And they'll just push the wax-eyes out of the way. Here you can see how small the wax-eyes are compared to a sparrow. 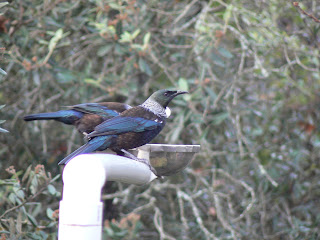 Aren't they gorgeous! When you see a tui high up in a tree or hear them rushing past you with their distinctive whooshing of wings, all you will notice is a black bird with it's distinctive white flash at it's throat.
But when you have them at eye level and in the full light, that's when you see the shimmering iridescent greens and purply blues on their wings, tails and heads. Their bodies aren't black, but deep reddish-brown. And then there is their shoulder 'cape' of curly white feathers, as if they're ready to go to the opera.
There is much jostling and positioning at the feeder, this weekend there were 3 of them, and obvious ranks of importance are well in place.
Very lively birds, the tuis swoop through the trees chasing each other.
Often they just launch themselves down without opening their wings until the last moment.

They're the first thing I hear every morning, and although we might curse them on early summer mornings in the future, how delightful it isn't my former drunk neighbours that will wake me up!
Posted by Elmtree at Monday, May 16, 2011

Great post, Ellen, and fantastic photos! Thanks for brightening my day... :)

We get Tuis here but they never liked my "tui-juice" I put out for them. Or perhaps it's the cats that keep staring at them when they eat? :)

Keep persevering! Apparently you just have to keep it out all the time. The mixture is 1 of sugar to 4 of water.
We are sitting 1 meter away on the deck and the cat is at our feet, and this doesn't worry them at all- the cheeky buggers!
Make sure they are able to balance and grip.