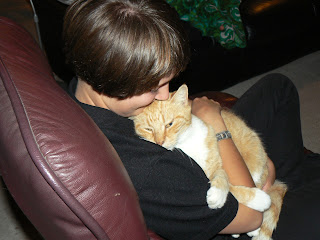 And so the time came to say 'see you later' to my eldest of 19. She got herself a job through Londonpub company, an agency that finds pub and restaurant work for young Kiwis and Australians on their big O.E. (Overseas Experience, something of an institution here in NZ. Somehow it usually starts in London because of the old motherland roots.)
She is now working in a large country pub/restaurant in a little village in the Surrey district, a 50min train ride from London. We google-earthed it, it looks very rural indeed. She is sharing a room at the establishment and gets 1 free meal a day, that's part of the deal. She has told us there is another kiwi girl and an ozzie girl there as well. She had to pay a fee to the agency, and she has to work there for 4 months, the wages are not huge, but enough to save for her summer trip through Europe we hope.
It will be a good experience we're sure. And it gives her a stable environment to venture from. No doubt she will be very busy this weekend with the royal wedding in Britain.
I managed to get this cuddly photo of her and Fox before she left. He only gives her a cuddle like that once every day. He won't do it with anyone else.
Wish I could give her one too.
I sure had to wipe away some tears at the airport last week Monday..
But Mums are allowed to do that. 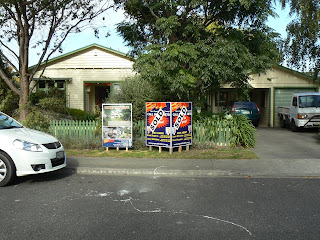 Great news , we sold our lovely house! To those people that wanted a second look. And a third.
It only took one open home. Just Amazing!
So we started packing in earnest. It took ages, but we had 2 weeks to move everything slowly into our new house in Napier, before we handed over the keys of the old house. Thank goodness, for 15 years accumulates much stuff! We hired a moving firm for all the big heavy things, but did the rest ourselves. Including many loads of firewood.
Our eldest had just 5 days in the new house, before she left for overseas, and for 3 of those she was called away to a funeral in Wellington; one of her study-friends had suddenly died. A girl of 19 contracted meningitis, a nasty disease that is still lurking about. She still managed to present herself to hospital, but it was too far gone and she died within a few days. So tragic for such a young life, my sympathy goes out to her parents.
Our youngest coped fine with the move, but she did not want to see the old house when it was empty, it upset her.
When after weeks of sorting and packing and cleaning , and taking a bunch of flowers and vegetables from the garden, we locked the doors for the last time, both my man and I were quite emotional saying goodbye to our old property.
Bye House,bye studio, bye garden, bye trees.
But people are allowed to cry when you leave something you loved. 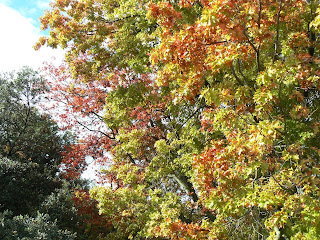 But look at the beautiful autumnal oaktree in our new garden. My Dad-in-law reckoned it to be about 80 years old at least. He stayed with us just as we were shifting , and since he is planning to soon move back to the Netherlands, it was good that he saw where we are now. 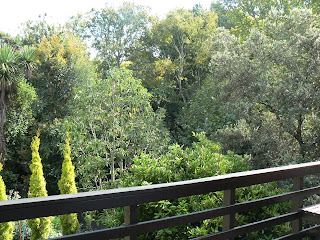 This is the view from our deck. Even though we are at a short walking distance from the centre of Napier, and these trees are all on other peoples' properties, it is very private and it feels like we are in our own little forest. 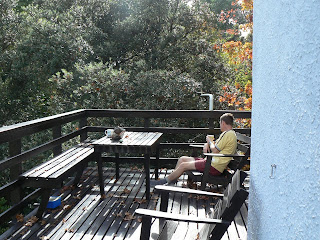 Taking a coffee break from all our unpacking and sorting out. The deck comes straight out of our livingroom. It also has stairs going to the garden. The tables and chairs were left by the former owners , who now live next door to us. They owned several properties here, and lived in this quirky house for 42 years. It must feel very strange for them too. 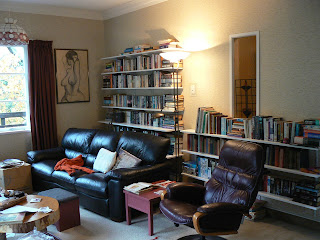 Our livingroom is taking shape now that the books are up. All those boxes of books took up so much space, so now we can look at different rooms. All my loves' music is unpacked and set up with his stereo etc. as well, and with the books, are so important to our feeling of home. At least we have somewhere to be comfortable and relaxed at night.
The kitchen is all operational and we can sleep and have showers. Slowly we are unpacking all the rest and I am finding that I need to get rid of much more than I thought. So several more loads of books and things have gone to opshops again.
I am getting a bit frustrated at the amount of time this is all taking though. I am getting used to the house and I am sleeping well, but I don't feel at home yet.
And I haven't made anything for more than a month now.
Posted by Elmtree at Friday, April 29, 2011

Congratulations on your new home, I hope it will very quickly come to feel like your place. We've just moved too, in fact handed the keys over about an hour ago. There went the whole school holidays LOL! A cuppa on the deck - marvelous.

Thank you little miss Flossy! I know what you mean about the school holidays, this morning I felt I could do with another fortnight easily, and this time without the unpacking, but actually relaxing!
May your new home be a blessing and remain stable underneath and around you!...