It's a Wrap! and another Old Lady. 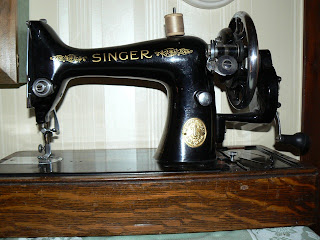 This is my other Old Lady in the hallway. She's in better condition and works very smoothly and silently. It has a hand crank on the side, so cute. According to her serial number, she has also been made in Scotland and is from 1945. 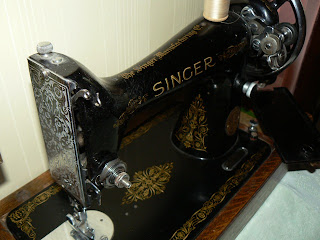 Beautifully decorated with golden swirls, very stylish. Again the machine comes away from the wooden base to store things underneath, but it also has a little compartment under the wheel with a lid. I have never sewn with it, so I don't know if it does other stitches than straight stitch. I doubt it. I think it used to have a little motor attached(in a very ugly way) but that has been taken off. 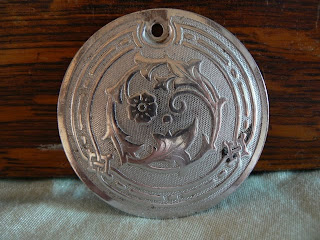 Another shank-plate from a third singer , in extremely bad shape. I don't have that one anymore, it was dumped years and years ago. This was the only bit that was still nice. I have used it as a pendant around my neck a few times in the past. It has a handy hole in it. 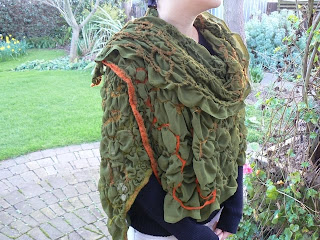 I am part of a group of felters that come together so now and then. So far we are an informal group ( I hate committee meetings etc.) that just pay a few dollars for the use of the hall, the coffee and tea, have a great productive day together, share gossip and ideas, and go home again. Lately we have been meeting in a new place, and they want to meet twice a month. 2 Weeks ago I 've managed to be productive and made this lovely wrap.
The wool has been "nuno"-felted onto a forest-green organza fabric. Because the fabric is sheer and has an open weave , the wool fibres have travelled through the organza, shrunk and "grabbed" the fabric. The fabric doesn't shrink along with the wool, so it starts to wrinkle up, giving it a very tactile texture. It feels quite elastic. 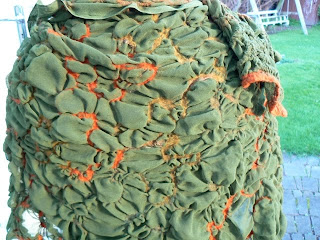 It is still featherlight, but warmer with the folds and bubbles and merino wool.
I made it in 1 day, and though I explained it in a few sentences, it was serious hard work.
It took much rolling in blinds with hot soapy water, and rubbing, and bending over and in the end picking up and slapping down again.
For a while I didn't think it was going to "take"; the wool was lifting off the organza and felting to itself. A bit of a panicky moment, since I had already worked on it for a good number of hours. But with patience and gentle coaching it came right.
Yes I was sore the next day, especially my arms. But I was very pleased. This is how a well felted nuno piece should look. In my eyes.... 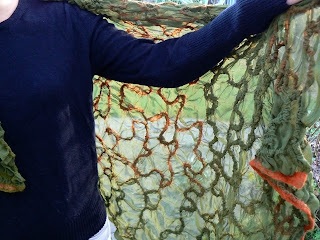 You can see how thin the fabric is. The wool was laid on in one continuous long winding squiggle . The colours change from greens to rusty orange and a little silk is included. 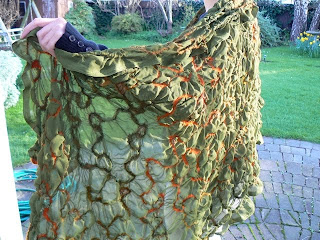 Our eldest, home for mid-term break , is modeling the wrap. Thanks honey!
Check out the daffodils in the background. And the apricot blossoms came out yesterday. The doors could be left open today. Spring is getting very near!!!
Posted by Elmtree at Saturday, August 28, 2010