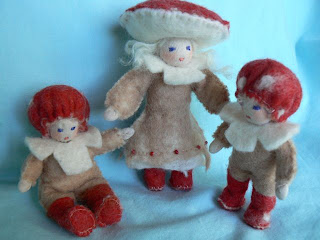 A little family of "Bushbabies". 2 Toddlers and their big sister, or is it their mummy?
I have very nice angora mohair at the moment, with a tight little curl at the end, just right for my Bushbabies' hair.
These will be going up for sale in my wee shop . 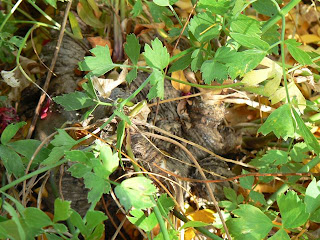 This is my lovage herb (levisticum officinale) , also known in Europe as maggi plant. I got it as a root from my old neighbour years ago.
I planted it in a pot and put it on the half circle of bricks out on the porch. It started growing, stuff happened and I forgot to plant it in the garden. After a year it broke it's plastic pot and bored it's roots in between the bricks. That's where it lives now, every autumn it dies down and gets bigger again in the spring.
Yes, we could uproot it, but it seems happy and it isn't in our way.
I like to use it in soups. But we eat more soup in the winter, when all the lovage leaves have gone.
So I have found a way of drying it in the microwave. This goes very fast, it has no time to wilt, and it retains more flavour and colour. 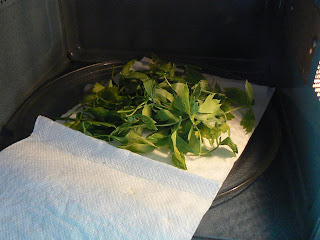 I give the lovage a quick rinse and pat it dry. Then I put a good handful between 4 layers of kitchen paper and microwave on high for 2 minutes. Check to feel if it is dry enough to crumble. If not turn the package over and microwave for another 30sec. or so, until it is crunchy. 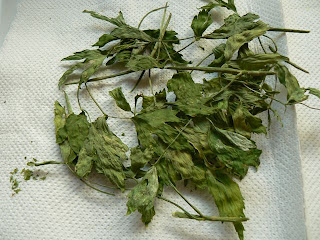 Crunchy but not burned...! 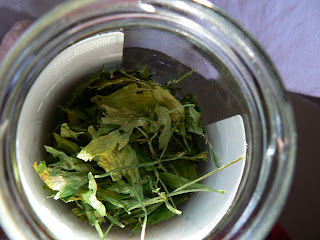 Then crumble roughly into a glass jar, seal and store in a dark place.
Roll on winter soup-and-bread nights!
My whole house smelled of lovage when I did this, and it brought my memory straight back to my Oma's (grandmother's) kitchen. She always used it in her soups and had it growing in her garden. I spend many holidays there, when I was a schoolchild.We were allowed to do just about anything there: feed the chooks, pick red currants, build a tent in the garden with old blankets and the washing rack, go for walks in the forest and play with the kids in the neighbourhood. And read all the old comic books,which were in a cupboard upstairs, and she'd take me on the back of her bicycle to do some groceries or to a church fair to buy old junk. 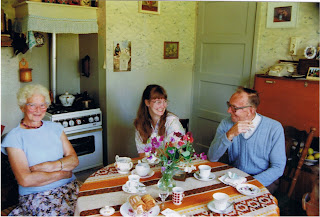 Here is a photo of them and me, from 20 years ago. That was the last time I saw them.
How did we manage to have such large gatherings of people in that little room for dinner.....!
Posted by Elmtree at Tuesday, May 04, 2010

Labels: garden, made by Elmtree